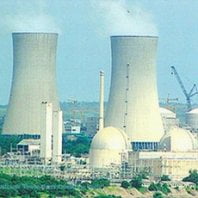 Recently, power generation unit 1 at Kakrapar Atomic Power Station (KAPS) in Gujarat was shut down for indefinitely period after leakage of heavy water.
The reactor was shut down as per design provisions after a small leak in the Primary Heat Transport (PHT) System of the plant was detected.
The Nuclear Power Corporation of India Limited (NPCIL), operator of KAPS has confirmed that there was no harmful, radioactive leakage and the backup safety mechanisms for emergency situation are working as intended.
Kakrapar nuclear plant

Heavy water (deuterium oxide D2O): It is used for cooling the nuclear reactor core i.e. as coolant and neutron moderator. PHWR is commonly using unenriched natural uranium as its fuel.