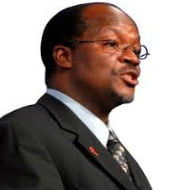 John Pombe Magufuli of ruling Chama Cha Mapinduzi (CCM) party has won the 2015 Tanzanian Presidential election.
With this victory he became fifth President of Tanzania since its independence from United Kingdom in 1961.
John Magufuli won this Presidential election by securing 58.46 per cent of the total votes and defeated Edward Lowassa of opposition Chadema party who received 39 per cent votes.
His win also continues CCM Party’s strong grip on power in Tanzania as it has governed the country since independence. CCM is the dominant ruling party in Tanzania and one of the longest reigning ruling party in Africa.