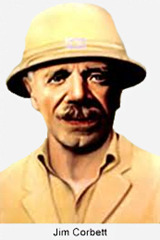 To celebrate the 137th birth anniversary of legendary conservationist Jim Corbett, Amar Chitra Katha will release a his graphic biography in bookstores across the country on July 25, 2012.

The book titled “Jim Corbett – Friend of the Wild” describes Corbett’s life of the famous hunter and nature protectionist.

Who was Jim Corbett?