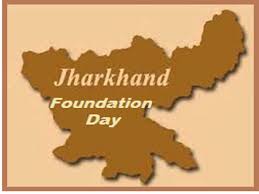 Prime Minister Narendra Modi greeted the people of Jharkhand on the 19th State Formation day on 15 November. The State was formed on 15 November 2000. Earlier it was the southern half of Bihar. Jharkhand borders with the five states- Bihar, UP, Chhattisgarh,  Odisha and West Bengal. The foundation day of the State falls on the birth anniversary of tribal leader  and freedom fighter Birsa Munda who is also known as Bhagwan Birsa.