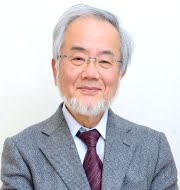 Yoshinori Ohsumi (71) of Japan has won the 2016 Nobel Prize for physiology or Medicine for his pioneering work on autophagy.
With this he becomes the 23rd Japanese national to win a Nobel prize and overall the sixth Japanese medicine Nobel laureate.
Mr. Ohsumi had received a PhD from the University of Tokyo in 1974. Currently, he is a professor at the Tokyo Institute of Technology (TIT).
What is Autophagy?

About Nobel Prize in Physiology or Medicine