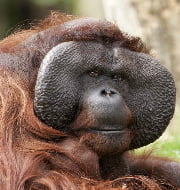 Bornean orangutan, a primate species has been declared critically endangered by the International Union for Conservation of Nature and Natural Resources (IUCN).
The declaration was based on the assessment for the IUCN Red List of Threatened Species was carried out earlier.
IUCN assessment has found that population of Bornean orangutans has dropped by nearly two-third since the early 1970s. It has projected that their population will further decline to 47,000 animals by 2025 representing population loss of 86%.

Reasons for decline in Population