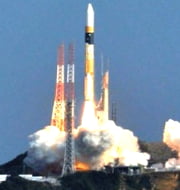 The Indian Space Research Organization (ISRO) has successfully launched advanced weather satellite INSAT-3DR.
The satellite was launched on board of Geosynchronous Satellite Launch Vehicle (GSLV-F05), from the Satish Dhawan Space Centre in Sriharikota.
So far this year, it was the seventh successful mission of ISRO including the IRNSS series and the scramjet propulsion mission.
About INSAT-3DR