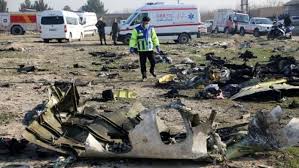 After pressure mounted on the Islamic Republic of Iran in the last 48 hours from the United States and Canada, Iran has reversed its claims of Mechanical failure and has admitted in a statement that the Ukrainian International Airlines Flight 752 was accidentally shot down by as the plane was mistaken as a ‘hostile target’ as it flew close to a sensitive site belonging to the Revolutionary Guards of Iran. Flight 752 was shot down on Wednesday, 8th January 2020 after taking off from the Tehran Imam Khomeini International Airport in which all 167 passengers and 9 crew members died, the flight was headed to the capital city of Canada, Toronto via Ukrainian capital city, Kyiv.

The statement was released by the Iranian Military on Saturday morning of 11th January 2020 in which the incident was blamed due to a ‘Human Error’ and mentioned that the person responsible would face legal consequences as investigation is underway, soon after the military statement, the President of Iran, Hassan Rouhani offered condolences via his twitter account to the victim’s families and termed the incident as a ‘Disastrous Mistake’.