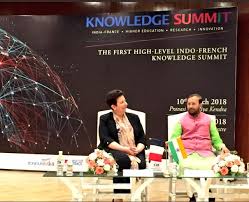 The first Indo-French Knowledge Summit for university, scientific and technology cooperation was successfully held in New Delhi. The two-day summit was organized by the French Embassy in India and co-hosted by Ministry of Human Resource Development.

The summit’s broader objective was to design roadmap of Franco-India cooperation for next five years, in collaboration with companies. It offered common platform for common goal to increase student mobility, enlarge R&D collaborations and link campuses to companies by focusing on employability.
More than 350 people from nearly 80 Indian Institutions and 70 French Institutions along with key enterprises participated in summit. It also had received support of Ministry of Science and Technology, Campus France and Confederation of Indian Industry (CII).
It ended with landmark agreement on mutual recognition of educational qualifications between two countries and record 15 other MoUs between universities and research institutions on joint initiatives and partnerships
During this event, various sessions and round tables on several topics of mutual interest of both t countries were held including on aerospace, agriculture and food processing, eco-energy, maths and information technology, strengthening employability among others.