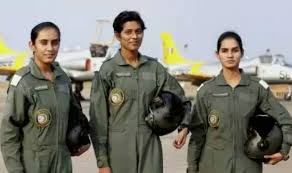 On October 22, 2020, the Indian Navy operationalised the first batch of women pilots on Dornier Aircraft at Kochi. This was done by the Southern Naval Command of Indian Navy.

In September 2020, for the first time in Indian history, women officers were selected to join as observers in the Helicopter stream of Indian Navy. They were awarded “wings” after graduating as “Observers” in INS Garuda, Kochi. They are now being operationalised.

There are more than 3,5000 women serving in Indian military. However, they were restricted from being deployed in combat role till 2015. In 2015, for the first time in Indian history, women were inducted into Air Force.

Today Indian Air Force allows women in combat roles. However, in the Indian Army they are permitted only in support roles and trainer roles.

Indian women were inducted in Defence system for the first time in 1992. They were allowed in serve as Short Service Commission Officers. Initially they were allowed to serve for 6 years and later this was increased to 14 years.

Women were allowed to serve as nurses in the Indian Army 1888. This was the first time India allowed women into defence systems.