Indian Naval chief on a four-day visit to Sri Lanka 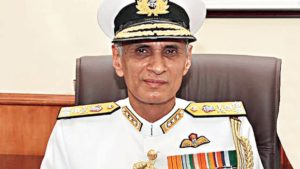 The Chief of Naval Forces Admiral Karabir Singh is to visit Sri Lanka between December 19 and December 22, 2019. The visit is aimed to strengthen bilateral maritime relations between the countries

The admiral will hold bilateral talks with the vice-admiral De Silva and other senior government officials. He will also attend the passing out parade of the 60th intake of midshipmen. The parade is to be held in Trinconmalee port. India is helping Sri Lanka build the port in Triconmalee. Japan also has its role in building the port. This potentially increases India’s outreach in the Indian Ocean. China already has its presence in the region with its 99-year leased Hambantota.

It is essential for India to keep its presence in the Indian Ocean region bold and secured. The region holds good amount of traffic. Around 9.84 billion tons of goods pass through the region annually. This includes one-third of world’s bulk cargo traffic and two-third of oil shipment. Therefore, it is essential for India to secure the region countering piracy and terrorism. India along with Japan, Australia and US has signed the Quad (Quadrilateral Security Dialogue) in 2007 to counter Chinese presence in the waters of Indian Ocean.

Quad was also revived recently at the India-US 2+2 dialogue held in Washington on December 18,2019.