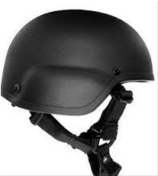 After decades of wait, the Indian Army has finally received its first batch of bullet-proof helmets. The helmets were manufactured by Kanpur-based MKU Industries at the cost of Rs 180 crore.

The new bullet proof helmets are capable of withstanding the impact of 9mm ammunition fired from a short range. The helmets match global standards of equipment for armed forces.
According to MKU, the bullet-proof helmets undergo rigorous quality and ballistic lab test at the company’s testing facilities in India as well as in Germany.
The helmets are designed in such a way that it can be comfortably integrated with communication and night-vision devices.

Head forms the most vulnerable part of the body that is prone to get injured during the combat operation. As per the studies, nearly 26%-28% soldiers die of head injuries. Bullet proof helmets can make a significant difference between life and death during combat operations.
At present, Indian armed forces are using patkas that are worn over outdated infantry helmets. However, it had severe limitations as they are bulky and heavy, weighing over 2.5 kgs. They are capable of protecting only the forehead and back of the head.

The Prime Minister’s Office (PMO) had asked NITI Aayog to come up with a roadmap over the possibility of encouraging domestic production of light weight body armours. NITI Aayog in March had prepared a draft note on ‘incentivising’ domestic manufacturing of light weight body armours for the army and para-military forces.
Earlier this year, the 30-year old Kanpur-based company, MKU limited, was awarded a contract worth Rs 180 crore to supply nearly 1.6 lakh helmets. In India, MKU and Tata Advanced Materials exports body armour to UN and NATO as well as to the armed forces around the world including United Kingdom, Germany and Spain.