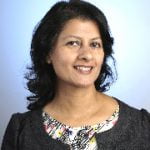 An Indian-American journalist Neela Banerjee was felicitated with a prestigious Edgar A Poe award along with of her colleagues from Inside Climate News.
They were felicitated by US President Barack Obama and First Lady Michelle during the annual White House Correspondents Dinner held in Washington DC.
The award was shared by Neela Banerjee and three of her colleagues from Inside Climate News John Cushman Jr, David Hasemyer and Lisa Song and Terrence McCoy of the Washington Post.

About Edgar A Poe Award