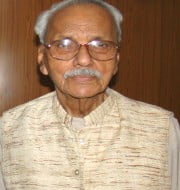 India’s former Ambassador to Nepal and modern Indian historian Bimal Prasad passed away in New Delhi at the age of 92.
He was a close associate of independence activist, social reformer Jayaprakash Narayan who had pioneered Total Revolution Movement in 1974-75.