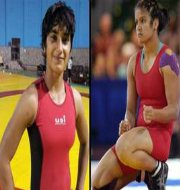 Two Indian women wrestlers Vinesh Phogat and Sakshi Malik have qualified for 2016 Rio Olympics scheduled to be held in August 2016.
Vinesh sealed her place for the Olympic berth after defeating Avin Demirhan of Turkey 12-2 in the 48 kg category in the semi-final match of the Olympic world qualifying tournament held at Istambul in Turkey. Now she will now fight for gold medal against Ivona Neena Matkovaska.
Sakshi Malik also entered the final in the 58 kg category and qualified for Rio Olympics. In the Semi-final she defeated Len Jhang.  In the final she will play against Russian Valeria Koblova Jholobova in the final.