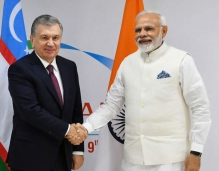 Important Outcomes of the Bilateral Meet

The agreement for the supply of Uranium was signed between the Department of Atomic Energy of India and the Novoi Minerals and Metallurgical Company of the Republic of Uzbekistan on the long-term supply of uranium ore concentrate for India’s energy requirements.
The bilateral meet also expressed satisfaction over the memorandum of understanding (MoU) on cooperation between Gujarat and the Andijan region of Uzbekistan signed during the state visit of President Mirziyoyev to India in 2018.

Trade relations between India and Uzbekistan

India’s major exports to Uzbekistan include Pharmaceutical products, mechanical equipment, vehicles, services, optical instruments and equipment.
India imports include fruit and vegetable products, services, fertilisers, juice products, extracts and lubricants from the Central Asian nation.
An Uzbek-Indian Free Pharmaceutical Zone is being developed in the Andijan region, which is on the southeastern side of Uzbekistan, near its border with Kyrgyzstan to attract investments in the pharmaceutical sector.
During the Bilateral meet, India thanked Uzbekistan for the support in organising the first-ever India-Central Asia Dialogue held at the level of foreign ministers in Samarkand, Uzbekistan.