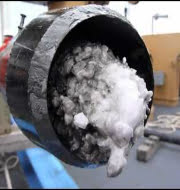 Joint expeditions by India and the United States have discovered large, highly enriched accumulations of natural gas hydrate (an icy form of the fuel) in Indian Ocean.
The discovery was made by the Union Oil Ministry and the US Geological Survey in the Bay of Bengal. It was the result of the most comprehensive gas hydrate field venture in the world to date that comprised of scientists from India, Japan and the US.
Significance
This is the first of its kind discovery in the Indian Ocean that has the potential to be producible and opens up a new resource to meet needs of energy hungry India.
The discovery will help unlock the global energy resource potential of gas hydrates as well as help define the technology needed to safely exploit (extract) them.
What are Natural gas hydrates?