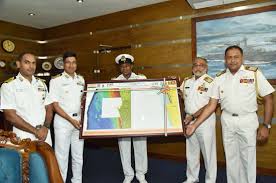 Indian Navy in collaboration with Sri Lankan counterpart has successfully completed second phase of joint oceanographic survey conducted off the South Western Coast of Sri Lanka.
The Indian side has handed over the survey charts to the Commander of the Sri Lankan Navy. The survey had commenced in October with the arrival of Indian Naval Ship Sutlej in Sri Lanka.

The aim of the joint survey was to update all navigational charts covering the southern Sri Lankan waters with the latest hydrographic data. The survey was extended to depth contour of 200 m from coastline, ranging from Colombo to Galle.
It also aimed to bolster cooperation between the two countries in the field of hydrography. The exercise provided opportunity for both navies to learn from each other experience and build on already existing high level of compatibility between them.

The move is expected to benefit international shipping traffic passing along southern coast of Sri Lanka and will pave way for blue economy. It is also expected to enhance level of navigational safety of all ships visiting Sri Lanka.

The first phase of the joint survey was conducted from March to May 2017 and the third phase is scheduled to be carried out next year. It was undertaken by Indian Naval ship INS Darshak, which is an indigenously designed and constructed vessel fitted with the latest state of the art survey equipment.
The task in first phase also included imparting of extensive training to the Sri Lankan Navy personnel who were embarked onboard ship to assist in capacity building of Sri Lankan Navy’s Hydrographic Department. he third phase is expected to be undertaken in 2018.