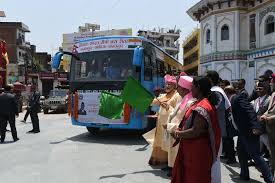 The bus service was flagged off after PM Modi visited famed 20th century Janaki temple, dedicated to the Hindu goddess Sita, where he offered special prayers. Janakpur is known as birth place of Sita, the wife of Lord Rama. Janaki temple was built in memory of Sita in 1910. It is three-storey structure made entirely of stone and marble is 50-metre high and spread over 4,860 sq feet. This was overall third visit PM Modi to Nepal and first high-level visit from India side since the formation of the new Oli Government in Nepal.