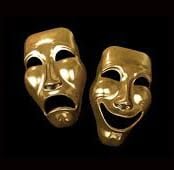 India for the first time will host 8th International Theatre Olympics, the greatest carnival of theatre in the world in 2018.  The 51-day carnival of theatre will begin on February 17, 2018.
The mega international event will be organised by the National School of Drama (NSD) in coordination with the Union Culture Ministry.
The 2018 Theatre Olympics will showcase best of the theatre productions from around the world. Besides, it will provide India an opportunity to showcase the richness and diversity of its culture to the world. It will host about 500 shows from across the world in 15 different cities across India including Delhi, Mumbai, Bengaluru, Kolkata and Chennai.

About The Theatre Olympics

The Theatre Olympics is an international festival that brings together finest productions of well-known theatre practitioners from around the world. It was established in 1993 in Delphi, Greece as an initiative of noted Greek theatre director Theodorus Terzopoulus. Greece was the first country to host the Theatre Olympics in 1995. Since then it was held in Japan (1999), Russia (2001), Turkey (2006), South Korea (2010) and China (2014) . The 7th edition of mega carnival of theatre was held in Poland in 2016.