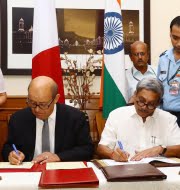 India and France has signed an Inter-Governmental Agreement for the purchase of 36 Rafale fighter jets at a cost of 7.87 billion Euros.
The deal was signed by Union Defence Minister Manohar Parrikar and his French counterpart Jean Yves Le Drian. Eric Trappier in New Delhi.
This is the first fighter aircraft deal signed by India with other country since the purchase of Sukhoi aircrafts from Russia in the late 1990’s.
Key Facts

Background
The deal comes after 17 months of tough negotiations since Prime Minister Narendra Modi announced the decision for direct purchase of the Rafale fighter jets in fly-away condition in April 2014 citing “critical operational necessity” of the Indian Air Force (IAF).