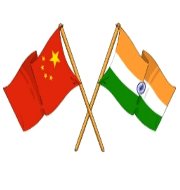 For the first time, border troops of India and China have held their first joint tactical exercise codenamed Sino-India Cooperation 2016 in Chushul-Moldo in Jammu and Kashmir.
This exercise is complement to the Hand-in-Hand series of India-China Joint Exercises and the recently conducted joint exercise in Sikkim.
Key facts

The increased bilateral interaction between Indian and Chinese border troops is considered as very positive step for enhancing confidence and building relations between the two armies.