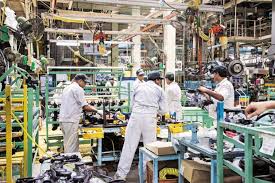 According to data released by Central Statistics Office (CSO), factory output measured in terms of Index of Industrial Production (IIP) had 7% in June 2018, five-month high. This was on account of higher output in mining, manufacturing and power generation segments. Moreover, CSO also revised IIP upwards for May 2018 at 3.9% from previous estimate of 3.2% estimated earlier.

The cumulative IIP growth for period April-June 2018 was 5.2% over corresponding period of previous year. The manufacturing sector in June 2018 grew by 6.9%, as against decline of 0.7% in the year-ago month. Power generation segment grew by 8.5% in June against 2.1% growth year ago. The mining sector output recorded 6.6% growth in June against 0.1% in June 2017.

IIP is composite indicator that measures short-term changes in volume of production of basket of industrial products during given period with respect to chosen base period. It is compiled and published monthly by Central Statistical Organization (CSO), Ministry of Statistics and Programme Implementation.
Base year: The CSO had revised the base year of the IIP from 2004-05 to 2011-12 in May 2017 to capture structural changes in economy and improves quality and representativeness of indices. The revised IIP (2011-12) reflects changes in industrial sector and also aligns it with base year of other macroeconomic indicators like Wholesale Price Index (WPI) and Gross Domestic Product (GDP).
Sector wise items and weightages: IIP covers 407 item groups. Sector wise, the items included falls into 3 categories viz. Manufacturing (405 items), Mining (1 items) & Electricity (1 item). The weights of the three sectors are 77.63%, 14.37%, 7.9% respectively. The revised combined weightage of eight core Industries in the IIP is 40.27%.