Impact of increase in salinity on Gangetic Dolphins 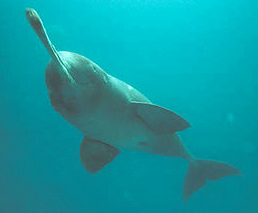 A five-year study by researchers Sangita Mitra (National Biodiversity Authority, Chennai) and Mahua Roy Chowdhury, (a marine biologist from the University of Calcutta, West Bengal) has been published in the Journal of Threatened Taxa.
The research has found that raising water salinity level is threatening the habitat of Gangetic river dolphins.

The study was conducted in the lower stretch of river Hooghly, covering 97 km stretch of the western, central and eastern Sundarbans in India between 2013 and 2016 in different seasons. The study area was demarcated for boat-based and land-based surveys based on interaction with local fishing communities. Researchers also measured the salinity level of the water during the different points in the survey. The findings of the Survey are: