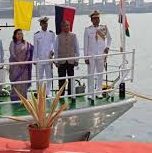 The Indian Coast Guard Ship (ICG) named as C-453 was commissioned into services in Chennai on February 19, 2021. This was the 17th interceptor boats out of the 18 which are being indigenously built by Larsen & Toubro Ltd.

Functions of the interceptor boat

The ship will be deployed to do surveillance of the Exclusive Economic Zone and other duties in accordance with the Coast Guard Charter. This will help in safeguarding the maritime interests of India.

As per the United Nations Convention on the Law of the Sea, 1982, the EEZ is an area in the sea for which a sovereign state owns a special right for the exploration and use the marine resources like energy production from water and wind. It includes the area from the baseline out to the 200 nautical miles (nmi) from the coast of any state. It can also include the continental shelf. However, it does not comprise of the territorial sea or continental shelf beyond the 200 nmi limit. This area is different than the territorial sea in the light that, this zone provides “sovereign right” which means rights of the coastal state below the surface of the sea.

It is the area from the baseline in which a state has a full sovereignty over the waters. It is a belt of coastal waters that extends up to 12 nautical miles from the baseline of the coastal state. In this zone, foreign vessels are allowed for innocent passage.