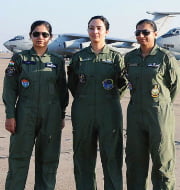 Comment
Women pilots were first included in IAF for choppers and transport aircrafts in 1991. At present, combat roles for women in the Indian Army and the Indian Navy are still off limits due to a combination of operational concerns and logistical constraints.