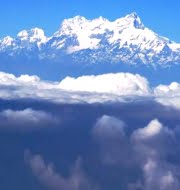 A high altitude glaciological research station in Himalaya called Himansh (meaning a slice of ice) began functioning above 13,500 ft (4000 m) in a remote region in Spiti, Himachal Pradesh.
Researchers will use this station as a base for undertaking surveys that would digitize the glacier motion and snow cover variations with exceptional precision.
Key Facts