Highlights: Ayushman Bharat scheme to be expanded to non-poor people 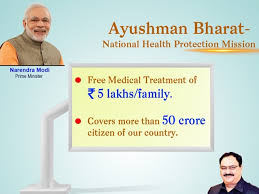 This scheme was launched by the Union Government in the year 2018 as the flagship health insurance scheme in order to provide cashless health cover of up to Rs 5 lakh per family per annum for secondary and tertiary care hospitalization. The scheme is implemented by the National Health Authority and it has already covered around 10 crore families or 53 crore people.

About the New Plan

The governing board of the NHA has approved a pilot project to cover the missing middle or non-poor population of the country under Ayushman Bharat scheme of the government. This segment is expected to cover multiple sections such as informal sector workers, self-employed, professionals, employees in the MSME sector, etc. It will help in understanding what works and what not in the implementation of the scheme.

The Central Government has allocated Rs 69000 crores for the health sector in the Union Budget 2020-21. Out of that, Rs 6000 crore has been allocated to the PM-JAY scheme. Now, with the expansion of the scheme, it would see setting up and development of more hospitals in Tier II, Tier III cities under the PPP model.

This is a campaign launched by the Department of Pharmaceuticals, Government of India in order to provide medicines to the masses at affordable prices. The medicines are provided through the Pradhan Mantri Bharatiya Jan Aushadhi Kendras. These centres have been set up to provide generic medicines to the masses of the country. Bureau of Pharma PSUs is the implementing agency of this scheme.