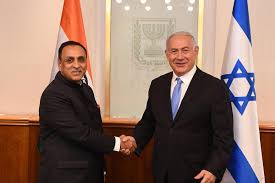 Gujarat has small Jewish community with no more than 170 members and majority of them located in Ahmedabad. Chief Minister Vijay Rupani, during his official visit to Israel in June 2018, had announced that his government was in the process of granting religious minority status to the community. Gujarat also had hosted Israeli Prime Minister Benjamin Netanyahu during his six-day India visit in January 2018.

Judaism is one of the oldest religions of the world, evolved in Egypt about 3,700 years ago. It believes in the unity and oneness of universal Creator. Judaism is the religion, philosophy and way of life of the Jewish people. Jews have been living in India for over 2,000 years ever since they first landed on West coast of India. Indian Jews are known as a peace-loving community. They follow Hebrew calendar. They have special thanks giving ceremony known as Eliyahoo-ha-Nabior i.e. ‘gratitude to Elijah the Prophet’, on festive occasions.
Indian Jews fall into five categories
Bene Israel – meaning Children of Israel. Marathi speaking. Arrived in Maharashtra 2,100 years ago.
Cochin Jews – arrived in India 2,500 years ago and settled down in Kerala as traders.
Baghdadi Jews – Jews who came to India as traders from West Asia, mainly from Baghdad. They are settled mainly in Mumbai, Pune and Kolkata.
Bene Menashe – The Manipur Jews constitute a community which sees itself as descendants of the Manasseh (Menashe) Tribe (which is one of the 10 lost tribes of Jews).
Bene Ephraim – also called “Telugu Jews”. They are a small group who speak Telugu. Their observance of Judaism dates to 1981.