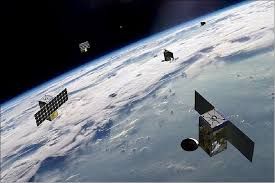 GRACE-FO is joint project between National Aeronautics and Space Administration (NASA) and German Research Center for Geosciences (GFZ). It is follow-on mission to original GRACE mission, which had mapped Earth’s water and ice by measuring changes in Earth’s gravity field from 2002 to 2017.
GRACE-FO will pick up where GRACE left off to continue study of rising sea levels, melting of glaciers and polar ice caps and other changes in distribution of water on Earth. The two GRACE-FO satellites will orbit together at 490km altitude near-polar orbit, circling Earth every 90 minutes.
To measure Earth’s gravity, two satellites will orbit around Earth together, with one trailing behind other at distance of 220km. The instruments on board of these satellites are so sensitive that they can detect changes with precision of about 1 micrometer (i.e. about one-tenth of a human hair over long distance).
These satellites have payload called Laser Ranging Interferometer. It can precisely measure gravity field changes due to change in separation distance between two satellites, revealing information about what kinds of features they are flying over. Earth is not perfect sphere) different features, like mountains and oceans, across its surface, so gravitational pull exerted on these satellites is not consistent. When gravity field changes, separation between two satellites changes slightly.