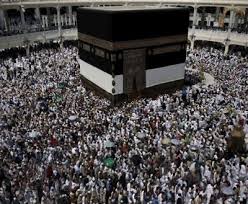 The Union Ministry of Minority Affairs has decided to end Haj subsidy from this year as a part of its policy to empower minorities with dignity and without appeasement.
This decision was taken based on the recommendations of Afzal Amanullah Committee and May 2012 Supreme Court order.

The Hajj is an annual Islamic pilgrimage to Mecca, the holiest city for Muslims. It is mandatory religious duty for Muslims that must be carried out at least once in their lifetime by all adult Muslims who are physically and financially capable of undertaking the journey and can support their family during their absence.
The number of Hajj pilgrims from India is largest among all countries around of world. Government’s Haj subsidy mainly included cheaper airfare and central assistance to pilgrims to reach specially-designed Haj departure terminals at airports. It also included food and medical care. Now onwards, proceeds from Haj subsidy will be used for educational empowerment and welfare of girls from minority communities.

The Supreme Court in May 2012 had directed that Haj subsidy should be done away gradually by 2022.  The order of court reiterated Holy Quran verses (Verse 97 in Surah 3, Al-e-Imran mandates that Hajj should be taken up only if a Muslim can afford it) and said that amount spent should be used in education and other measures for social development of the minority community.
In accordance with the order, Union Government had constituted committee headed by former secretary Afzal Amanullah to suggest framework for new Haj policy for 2018-22. It had submitted its report in October 2017. The committee had recommended for gradual withdrawal of Haj subsidy. It also had recommended to allow older Muslim women to travel to haj without male guardians.

Earlier, Union Government had allowed Muslim women above age of 45 to go on Haj without male company, in a group of at least four. Earlier, women were not allowed to travel without ‘Mehram’ (husband or a male first blood relation as guardian).