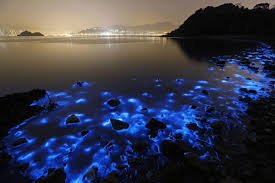 Scientists have found that global warming is driving proliferation of Noctiluca algae (commonly known as sea tinkle), a harmful algae in Arabian Sea responsible for glowing of Mumbai’s beaches in dark. The study was jointly conducted by researchers from Indian National Centre for Ocean Information Services (INCOIS), a Ministry of Earth Sciences body and US National Oceanic and Atmospheric Administration (NOAA).

Noctiluca algae is parasite and occurs in patches or blooms in northern Arabian Sea. Its bioluminescence characteristic i.e. glow in dark has earned it name ‘sea sparkle’. The algae compete with fish for food and choke their supply. It devours one of most important planktonic organisms at base of fish-food chain, namely diatoms. It also excretes large amounts of ammonia, which causes massive fish mortality.

Earlier studies had linked increase in algal patches to coastal pollution from major Indian cities along west coast. However, in this study researchers found that global warming conditions are responsible their proliferation. Warming of oceans due to global is increasing temperature differences among layers of sea water.
This temperature differences has slowed the upward transport of nutrients like silicate from ocean bottom, lowering its concentration at surface. Diatoms growing in surface water which need both sunlight and silicate to build their glass skeletons, fail to thrive when silicate is in short supply. On other hand, Noctiluca algae remain unaffected by these changes and prey on remaining diatoms. Thus, the study shows that intensifying global warming conditions will disrupt fish-food chain and cause decline of fisheries in the region.