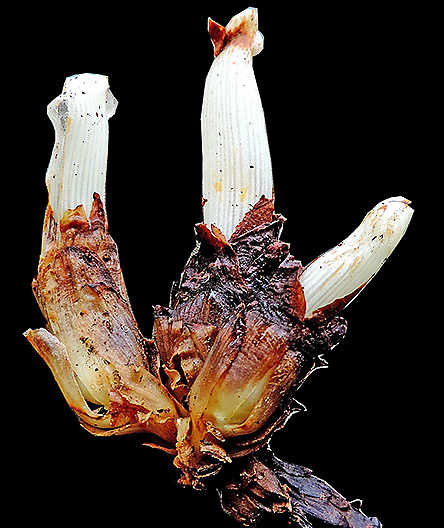 Scientists from Botanical Survey of India (BSI) have discovered a new species of parasitic flowering plant named Gleadovia konyakianorum. The species was named in honour of Konyak tribe of Nagas.
The plant was discovered in the semi-evergreen forest at an altitude of 1,500-1,600 metres during an exploration near Tobu town of Mon district in eastern Nagaland. Parasitic plants are often referred to as curious plants, as they steal their nutritional needs from the host

Gleadovia konyakianorum is a holoparasite (complete parasite) plant that derives its entire nutritional requirement from the host plant, which is a Strobilanthes species. It has no chlorophyll (which helps a plant make its own food using sunlight).
Though it has no chlorophyll, the plant has a vascular system and extracts its nutrition from the host plant with the help of a haustorium. A haustorium is specialised structure with which plant parasites attach themselves to host plants and derive nutrition.
Gleadovia konyakianorum species is root parasite that grows up to 10 cm in height, and bears white, tubular flowers. It is only the fourth species from the genus Gleadovia to be found in the world. The other three are Gleadovia banerjiana (discovered in Manipur), Gleadovia mupinense (found in China) and Gleadovia ruborum (discovered in Uttarakhand and also reported from China).
Its protection status has been described as ‘data deficient’ as per International Union for Conservation of Nature (IUCN) Red List of Threatened Species criteria.