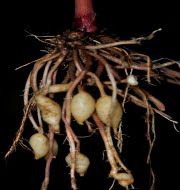 Scientists from Botanical Survey of India (BSI) have discovered a new species of Zingiber (commonly referred as ginger) from the Andaman and Nicobar Islands.
The new species has been named as Zingiber pseudosquarrosum and belongs to genus Zingiber. It is used for its medicinal values by the local Particularly Vulnerable Tribal Groups (PVTGs) of the Andamans.

There are 141 species of genus Zingiber distributed throughout tropical Asia, including China, Japan and tropical Australia. Of these, 20 are reported from India, which include seven ( including Zingiber pseudosquarrosum) from Andaman and Nicobar Islands. Species belonging to genera Zingiber are monocotyledonous flowering plants and their hizomes are widely used as a spice or a traditional medicine. Commonly used species of Zingiber are known for its aromatic smell is cultivated widely across India.