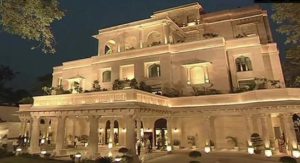 The new building is situated at Akbar Road in national capital and is built in more than 7,000 sq metres of area.

It has been described as a mix of traditional and modern architecture with a rich reflection of western state’s culture. It will also represent the culture, craft and cuisine of Gujarat.

This is the ‘first eco-friendly’ state Bhawan in national capital.

It has been built at a cost of around Rs.131 crore by Gujarat Government. It was completed 3 months ahead of the deadline.

Bhavan is equipped with traditional and modern artefacts and technologies and will serve as a home for Gujaratis in New Delhi.

The Prime Minister, Narendra Modi, will visit Tamil Nadu and Kerala on February 14, 2021. He will i...