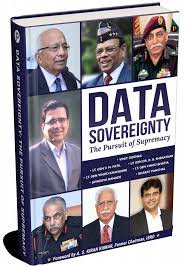 Author Vinit Goenka released his new co-authored book titled ‘Function of Data Sovereignty: The Pursuit of Supremacy’. He is founder member of Centre for Knowledge Sovereignty (CKS), which is an endeavour to acquire knowledge through experts of eminence in respective field.

Data Localization: The Book focuses in-depth on steps and concrete actions required to build highly capable data centres that will ensure data security, and implementation of well-thought-out policies, procedures, and laws on data sovereignty to ensure that India weakens all fear of Data Colonisation well in time. The impact of these steps would be a radical breakthrough in ease of doing data centre business in India.

Caution: India is one of the world’s biggest markets in data generation i.e. India generates data and consume data. Although data is the new fuel which runs world, it is also a double-edged sword hence author also cautioned against data colonisation being not too far.

Risk: It identifies risks and gaps in areas such as regulatory policies, energy, water resource, network bandwidth, and risk & management of natural disasters which prevent market forces in India from playing its due role.

It also attempts to set a clear objective for regulators to formulate a business-friendly, unambiguous, and strict policy environment for data centre business in India.

In 2018, Indian data centre infrastructure market was valued at US$27 billion, which by 2020 is expected to be second largest market within Asia-Pacific region