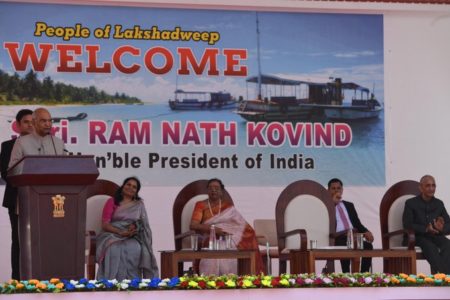 The Foundation Stone of Super Specialty Hospital in Kavaratti, capital of the Union Territory of Lakshadweep, was laid by India’s President Ram Nath Kovind on Tuesday, 7th January 2020 during his first-ever State visit to the Union Territory.

The Administrator of Lakshadweep, Dineshwar Sharma, along with others received the President with a traditional welcome and was accorded a Guard of Honour.

The President addressed the audience and expressed that he was elated to lay the foundation stone of the super-specialty hospital and described Lakshadweep as a special place, blessed with unparallel natural beauty. He informed that the hospital will address many of the health-related problems of people living in and outside of Kavaratti and it will reduce the need for patients to go to Kochi for treatment.

The President emphasized the need to expand the use of renewable energy further and added that we need to find ways to reduce dependence on diesel-generated power as all islands in Lakshadweep are fully dependent on diesel generators for producing electricity.