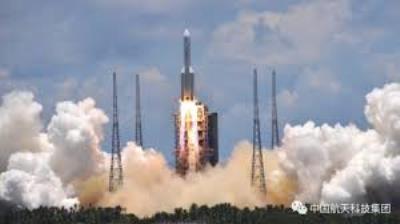 China has successfully launched its first-ever Mars probe on July 23 with the objective of complete orbiting, landing and roving in a single mission so that it can take an ambitious step towards the planetary exploration of the solar system.

Details of the Mission

A Long March 5 rocket, the largest and most powerful launch vehicle in the country, has been used to carry the satellite. The mass of the satellite is about five tonnes and it soared into the sky from Wenchang Spacecraft Launch Site on the coast of Southern China’s island province of Hainan.

Within 36 minutes, it was placed in the Earth-Mars Transfer Orbit and now it is going to embark a seven-month-long journey to the red planet.

Named as Tianwen – I or Quest for Heavenly Truth I, it is going to fulfil three objectives mainly – orbiting the red planet for comprehensive observation, landing on Martian soil and sending a rover to roam the landing site. It will also conduct scientific investigations into the soil, geographical, structure, environment, atmosphere and water of the red planet.

China wants to catch up with India, the US, Russia and the EU in order to reach Mars, with this maiden mission.