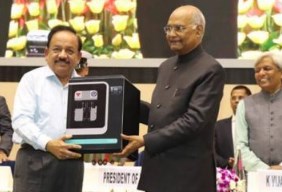 The President of India Ram Nath Kovind launched the first Indigenous High-Temperature Fuel Cell System developed by Council of Scientific and Industrial Research (CSIR) under ‘New Millennium Indian Technology Leadership Initiative (NMITLI)’. The launched was made at Vigyan Bhawan in New Delhi on the occasion of 78th Foundation Day CSIR.

The 5.0 kW fuel cell system generates power in a green manner. It uses methanol or bio-methane, with heat and water as bi-products for further use. This further amounts to more than 70% efficiency, which otherwise may not be possible by other energy sources.

In the field of clean energy, Fuel Cell distributed power generation systems are emerging as one of the most promising alternative to grid power.

This development is most suitable for distributed stationary power applications and where highly reliable power is essential with simultaneous requirement for air-conditioning such as- for small offices, data centers, commercial units, etc.

It will also meet the requirement of efficient, clean and reliable backup power generator for telecom towers, remote locations as well as strategic applications.