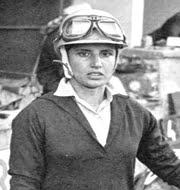 The first female F1 (Formula One) driver Maria Teresa de Filippis passed away on 8 January 2016 in Italy. She was 89.
She is remembered as a first female pioneer in motor racing, a sport mainly dominated by men after she had participated in the five World Championship Grand Prix for the Maserati team in 1958.