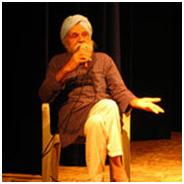 Famous Punjabi playwright and theatre personality Gursharan Singh popularly known as Bhaji / Bhai Manna Singh (82), passed away recently. He s best known for starting the tradition of theatre in Punjab and was known as Baba Bohar (towering personality) of Punjabi theatre. He was a famous personality in Punjabi drama and also a social reformer. He is also know n to have devised the character of Bhai Manna Singh through his plays. He was also the only theatre personality who stood up in opposition to the militancy movement which shok Punjab during the 1980s-1990s. At those times when people did not had courage to move out of their homes, Bhaji along with his team toured the backwoods of Punjab, performing plays like hamak Nagare dee, Bhai Mana Singh, Miti da Mul which attacked the movement directly. Several awards were conferred on him including the Kalidas Samman and Kala Ratan awarded by the National Sangeet Natak Akademi.