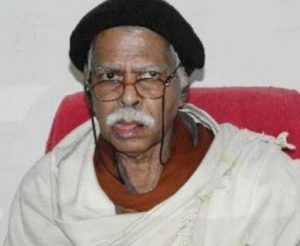 Renowned mathematician Vashishtha Narayan Singh, who came to be known as India’s Einstein, passed away in Patna on 14 November. Born in Bihar, the 74 year old Vashishtha was suffering from a prolonged mental illness schizophrenia from the last 35 years.  He earned worldwide recognition when he challenged Einstein’s theory.

He was born in a poor family in Basanatpur village of Bihar’s Bhojpur district on 2 April 1942. He moved to America in 1965 and finished his PhD on ‘reproducing kernels and operation with a cycle vector‘ from University of California, Berkely in 1969. He then went on to become an associate professor at Washington University and later even worked in US Space Agency NASA where he surprised many people with his mathematic skills. But in 1971 he returned to India and worked at IIT Kanpur, IIT Bombay and ISI Kolkata.

He was fond of books, pens and diaries and after he returned from the US, he brought back 10 boxes of books with him. It is also said that at the time of launch of Apollo, the mathematical calculation done by Vashishtha Narayan were exactly same as computer’s calculations.