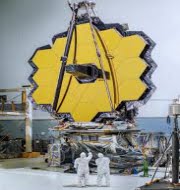 Mission officials for NASA’s James Webb Space Telescope (JWST) have announced the initial science targets for the James Webb Space Telescope. The JWST has been scheduled to look at a large number of things in the universe including icy moons, distant exoplanets and galaxy clusters. It will look at very first galaxies after the Big Bang, search for fingerprints of life on Enceladus, Europa, and exoplanets like TRAPPIST-1e etc. As a part of the initial observations, 2100 observations has been planned for the JWST by the mission handlers.
JWST, being the most powerful telescope designed and built on Earth is scheduled to be launched in October 2018 on an Ariane 5 rocket from French Guiana.

JWST is a joint project of the NASA, the European Space Agency and the Canadian Space Agency. The Space Telescope Science Institute (STScI) in Baltimore will conduct Webb science operations.
The JWST will be the successor of 26-year-old Hubble Space Telescope. JWST is 100 times powerful than the Hubble Space Telescope and will be the largest telescope ever sent into space. JWST will have a very large infrared telescope with a 6.5-meter primary mirror. Its sun shield is 22 metres which is roughly the size of a tennis court and has a mirror 6.5 metres which is over twice the size of the Hubble Space Telescope.
The JWST is named after the former NASA administrator, James Webb. JWST was formerly known as the “Next Generation Space Telescope” (NGST).
In November 2016, The National Aeronautics and Space Administration (NASA) had completed the construction of the James Webb Space Telescope (JWST) after more than 20 years of work.
Instruments of JWST include Cameras and spectrometers that are able to record extremely faint signals. NIRSpec having programmable micro-shutters for observation of up to 100 objects. Cryocooler for cooling the mid-infrared detectors.