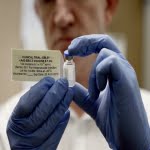 The clinical trials of two experimental Ebola vaccines cAd3-EBOZ and rVSV-ZEBOV were found to be safe and capable of eliciting immune response against Ebola virus that lasts for at least one year.
The findings were based on a study of clinical trials on 1,500 adults that began during West Africa Ebola outbreak. Three groups of 500 volunteers received one of the vaccine candidates or a placebo (saline injection).

During clinical trials, it was observed that responses to both vaccine candidates were modest at one week. However, by one month, 71% of cAd3-EBOZ recipients and 84% of rVSV-ZEBOV recipients developed an antibody response compared to 3% of placebo recipients.
These trials have yielded valuable information for development of these two Ebola vaccine candidates and also demonstrated that well-designed, ethically sound clinical research can be conducted during an epidemic. These safe and effective Ebola vaccines will play important role in controlling inevitable future Ebola outbreaks in addition to existing classical public health measures.

EVD is viral hemorrhagic fever of humans and other primates caused by ebola viruses. It was first identified in 1976 in the Democratic Republic of Congo (DRC) in a village near the Ebola River, from which it takes its name. The virus is transmitted to people from wild animals and spreads in human population through human-to-human transmission. Fruit bats are natural host of this virus. It spreads through contact with body fluids of inflected persons such as blood, urine and saliva.
It also spreads through sexual transmission. Symptoms of EVD are high fever, bleeding and central nervous system damage. The average EVD case fatality rate is around 50%. However, in past outbreaks case fatality rates have varied from 25% to 90%. In 2014, Ebola virus had erupted periodically mainly across west and east Africa mainly in Guinea, Liberia and Sierra Leone. It was the deadliest outbreak of the virus in the history which had killed 11,000 people.