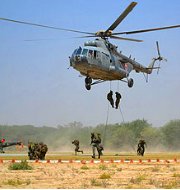 The eight edition of India, Maldives bilateral military exercise EKUVERIN 2017 was held in India in Belagavi, Karnataka. The aim of the exercise was to conduct military training between armies of both countries with emphasis on counter insurgency, counter terrorism operations (CICT Ops).

The focus of exercise was to acquaint both armies with each other’s operating procedures in backdrop of CICT Ops in urban or semi-urban environment under United Nations charter. It was aimed at enhancing interoperability between two armies as contingents hone their tactical and technical skills. The exercise provided opportunity for two armies to activate Joint Operations Centre at Belagavi.
In this edition of exercise, Maldivian team was represented by two officers and 43 other ranks, while Indian Army was represented by three officers, three Junior Commissioned Officers and 39 other ranks belonging to Gorkha Rifles Battalion (Sirmoor Rifles).

Indian Army and Maldives National Defence Force have been holding Exercise Ekuverin (meaning ‘friends’ in the Maldivian language) since 2009 on alternate years in their countries. The last one was held at Kaddhoo in the Lammu Atol of Maldives. It had conducted military training between armies of both countries with emphasis on amphibious & CICT Ops.