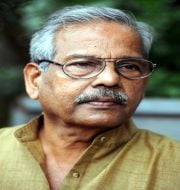 Eminent writer C Radhakrishnan was selected for the prestigious Mathrubhumi Literary Award for the year 2016.
He was selected by a panel chaired by novelist M Mukundan in recognition of his contribution to the field of literature.