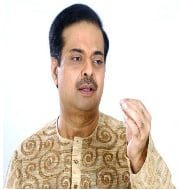 Eminent singer, composer, lyricist and actor Shekhar Sen has been appointed as the chairman of the Sangeet Natak Akademi (SNA).
His appointment was announced by Union Ministry of Culture and will have term five years with immediate effect.
This post was vacant since September 2014, after then Chairman Leela Samson had resigned.

You may read more about Sangeet Natak Akademi here