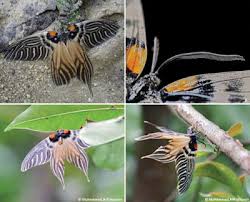 Researchers from Bombay Natural History Society (BNHS) have discovered a new species of moth, scientifically named Elcysma Ziroensis from Talley Wildlife Sanctuary in Arunachal Pradesh.
The discovery was published in the Journal of Threatened Taxa, an international journal on conservation and taxonomy.

Elcysma Ziroensis is commonly called Apatani Glory, named after a local tribe called Apatani. It was discovered at an elevation of 1,700m in Ziro. This discovery represents the first record of Elcysma from Arunachal Pradesh.
This species has only been seen during autumn, notably in month of September. This indicates that it is univoltine species, meaning it has one brood of young in a year.

It is a wildlife sanctuary as well as a bio-diversity hotspot located in Arunachal Pradesh. It is situated at altitude of 2400 metres with rivers like Pange, Sipu, Karing and Subansiri flowing through the Reserved Forest and Sanctuary. Talley is plateau with dense forest of silver fir trees, pine clad plateau of beautiful grandeur, and vast wasteland. It mainly comprises sub-tropical and alpine forests and has variety of flora and fauna, many of which are endangered. It is home to highly endangered species like clouded leopard. Pleioblastus simone is a bamboo variety only found in Talley Valley. Arunachal Pradesh as a whole contains 40% of the floral and faunal species in India.