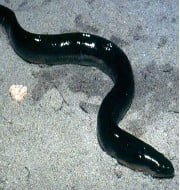 Gymnothorax pseudotile: It was discovered at the Digha coast of the Bay of Bengal. It has dark brown and white dots on the dorsal side. It is about 1 feet to 1.5 feet long.
Gymnothorax visakhaensis: It was discovered from the Visakhapatnam coast of the Bay of Bengal. It is uniformly brown. It is about a foot long.
Enchelycore propinqua: It was also discovered from Visakhapatnam coast. It is reddish brown body mottled with irregular creamy white spots. It is the smallest of three measuring less than a foot.