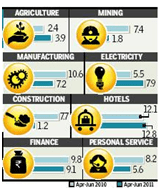 The Indian Economy has shown the slowest pace in six quarters. Data released by the Central Statistics Office have showed growth in the April-June quarter of the current financial year stood at 7.7% compared to 8.8% in the same year-ago period. In the January-March quarter, the economy expanded 7.8%. The reasons are:

However, India is still one of the fastest growing economies in the world. This is the second successive quarter when growth has slowed below the 8% mark but still remains robust compared to other global economies. (Graphics source: Economic Times)